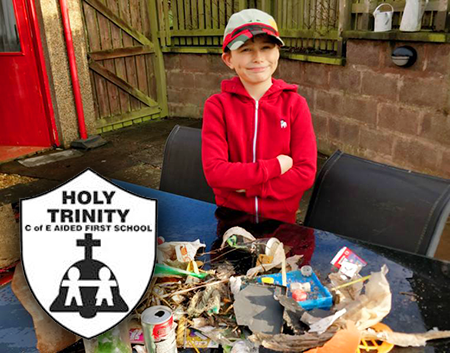 Pupils from Holy Trinity First School in Berwick have been working hard to make a difference in their local community and beyond through their Young Leaders Award challenges.

Several pupils have been campaigning to national companies to encourage them to reduce their use of plastic.  One pupil, wrote to the makers of Fruit Shoots and Chupa Chups lollies, after finding a large number of lolly sticks and caps from the drinks bottles as he cleaned up litter on the local beach.  Both Britvic, who make Robinson’s Fruit Shoots, and Chupa Chups responded to say they were looking at new ways of minimising plastic packaging and educating their customers about recycling.

Another child wrote to all the supermarkets in Berwick regarding their use of plastic packaging.  Both Tesco and Morrisons responded with invitations for the pupils to visit the stores.  Morrisons also invited the pupil to cut the ribbon at the re-opening of their store.

“The impact of the project has been fantastic.  The children are enthused and inspired to think about their own skills in leadership, developing their own strengths and weaknesses to become active citizens in their local community.”

It is wonderful to see these Young Leaders empowered to campaign for change in this these important issues.  They are a fantastic example of pupils ‘being the change they want to see’!