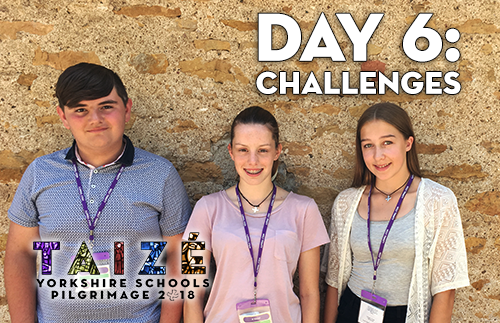 Having now spent six full days in Taizé, I have come to learn that this tiny little village is much more than a village, it’s a unity of communities from countries all over the world. But with every country, comes a language barrier - one which we all overcome.

When we arrived in Taizé, our welcome meeting leader indicated that you will soon begin speaking something different to your own language, and speak a sort of Taizé English. I have now realised that this is true, and that many commonly used words which are difficult for speakers of minimal English, are now skipped. I now often pronounce t’s as d’s and even take on a dutch/german tone when speaking to different nationalities, which has helped me during the chants in church, singing in a variety of languages.

By adapting my speaking, and even attempting to pick up some extra French & German, a reward much greater than the difficulties becomes apparent, you get to reflect on your own life. Thinking of how others live and understanding their day to day lives helps me think about ways I can make a difference when I get home. For example, some people have discussed how in their local villages, it is a custom to help out at homeless shelters or soup kitchens. This is definitely something to think about in the UK, our homeless population is on the rise, but we do very little for them.

I personally, struggled to eat the food here that I wouldn’t usually eat at home, but I soon started to feel grateful as it made me realise how lucky I was to actually have food to eat as many others are less fortunate than me and do not have fresh meals prepared for them everyday as I do.

Personally, I struggled with the silence, but overtime I began to appreciate what is important to me as I had more time to reflect on my life. I began to be thankful for what I have as I experience what it’s like to live a simple life.