Hope can triumph over cynicism and love conquers all! 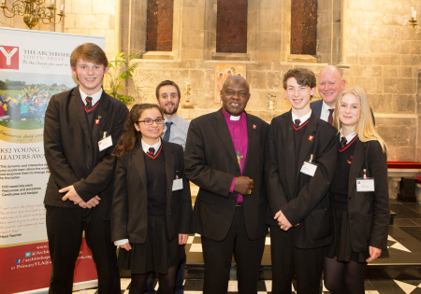 It was heartrending for me last week to stand in silence with countless others in and around Manchester Cathedral, marking the first anniversary of the bombing atrocity which killed 22 people, maimed, injured 800 and left thousands grief-stricken or traumatised.  One young woman said she had died hundreds of times in her subsequent nightmares.

All this because a fanatical young man had been so consumed with hatred that he selected an exuberant pop concert as the place to kill himself and take as many strangers as possible with him.  Yet everyone spoke of love, not hate. Rhiannon Graves, from Hull, who had been at the concert, came back “to show love and solidarity”.  A multi-faith group held banners reading "Manchester City United" and "Total Love". A 16-year old who was terribly injured said, "We won't be beaten because we're Manchester.”  In the Cathedral, Prince William read that priceless definition of love from the Bible, Chapter 13 of the First Letter of St Paul to the Corinthians.

It’s that hope, that determination, that capacity for love, which has always inspired me to encourage young people to discover and develop their hidden abilities. No-one is off limits, for God doesn’t have favourites.  With that in mind, we started a charity in Yorkshire ten years ago. It spread across the North and is now going nationwide.  I’m immensely proud of it.  Called ‘The Archbishop of York Youth Trust’, we work with schools to help young people develop their leadership potential.  And there’s no shortage of that.  Here’s what some participants said about the programmes in which they took part:

Already 63,000 young people from 550 schools have been involved.  The programme is called The Young Leaders Award in which they run innovative projects which benefit the community.  In Malton they took responsibility for organising the annual senior citizen’s Christmas party - afterwards, guests said it was a wonderful event with high quality entertainment and service.  A Wigan Primary School raised money for the RSPCA via a sponsored Mud Run in freezing weather. Staff commented that they had showed incredible determination.

Schools are under immense pressure these days to satisfy constant curriculum changes, so it’s great to know how enthusiastic they are about this entirely voluntary add-on.  One said,

“The Award has built confidence, boosted self-esteem and resilience, which are the skills we need for the future.”

All this was confirmed last year by an Independent Evaluation by the University of Gloucestershire.  They found significant improvements in maturation, self-awareness, confidence, respect, tolerance and social awareness.  The list goes on.  60% of the pupils stated that they ‘agreed’ or ‘partly agreed’ that they would continue to volunteer in their communities after the programme had finished.  That’s great news for the UK, for we depend on volunteers to complement State welfare.  If it wasn’t for charities both here and abroad, we would be infinitely poorer.

As well as the Awards, the Youth Trust has made grants (over £100k to date) to projects in some of this country’s most deprived areas. Most recently my Youth Trust awarded micro grants for schools to run their own social action projects to tackle areas of need in their communities. We also take every opportunity to blow the trumpet for young people, by challenging many false perceptions and telling real life stories about their achievements - thank you Yorkshire Post for letting me do that now!  If you get a moment, you can find out a lot more from our website: www.abyyt.com

Every new generation has the potential to show the world that hope can triumph over cynicism and love conquers all.  The Manchester memorial service gave us a glimpse of that.  Now we must turn our aspirations into action.  One of the Youth Trust’s favourite sayings, which came from Mahatma Gandhi, is “Be the change you want to see”.  When you think about it, that can apply to everybody.  Pensioners included.

Read the Article in the Yorkshire Post here: https://bit.ly/2J4hRkM